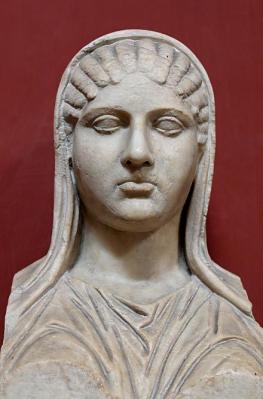 Aspasia ( c. 470 BC – c. 400 BC) was an influential immigrant to Athens who was the lover and partner of the statesman Pericles. The couple had a son Pericles the Young, but the full details of the couple's marital status are unknown. According to Plutarch, her house became an intellectual centre in Athens, attracting the most prominent writers and thinkers, including the philosopher Socrates. It has also been suggested that the teachings of Aspasia influenced Socrates. Aspasia was mentioned in the writing of philosophers Plato, Aristophanes, Xenophon, and other authors of the day. Though she spent most of her adult life in Greece, few details of her life are fully known. Some scholars suggest that Aspasia was a brothel keeper and a harlot. Aspasia's role in history provides crucial insight to the understanding of the women of ancient Greece. Very little is known about women from her time period. 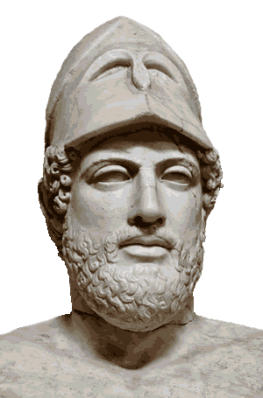 Pericles (c. 495 – 429 BC) was arguably the most prominent and influential Greek statesman, orator and general of Athens during the Golden Age— specifically the time between the Persian and Peloponnesian wars. He was descended, through his mother, from the powerful and historically influential Alcmaeonid family.

Pericles had such a profound influence on Athenian society that Thucydides, a contemporary historian, acclaimed him as "the first citizen of Athens". Pericles turned the Delian League into an Athenian empire, and led his countrymen during the first two years of the Peloponnesian War. The period during which he led Athens, roughly from 461 to 429 BC, is sometimes known as the "Age of Pericles", though the period thus denoted can include times as early as the Persian Wars, or as late as the next century.

Pericles promoted the arts and literature; it is principally through his efforts that Athens holds the reputation of being the educational and cultural center of the ancient Greek world. He started an ambitious project that generated most of the surviving structures on the Acropolis (including the Parthenon). This project beautified and protected the city, exhibited its glory, and gave work to the people. Pericles' most visible legacy can be found in the literary and artistic works of the Golden Age, most of which survive to this day. The Acropolis, though in ruins, still stands and is a symbol of modern Athens.