" I have difficulties in dreaming in front of concrete and cars, then, I sculpt and I paint. Every human being has a mode of expression of his own. The artist, him, opens bigger the door and he exposes himself a little more than the others " 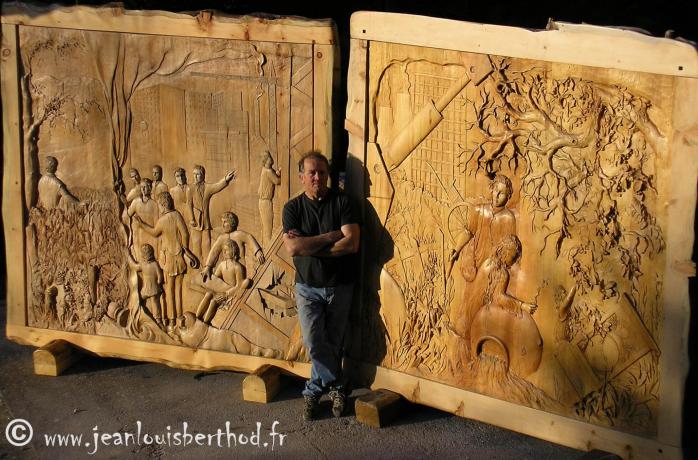 Agricultural mechanic then automobile mechanic for more than forty years, Jean-Louis Berthod always had a passion for the wood carving, a passion he practiced in parallel as amateur sculptor. At the beginning of the eighties, he begins with small realizations, being sometimes inspired by famous works like one of the nymphs of "the Fontaine des Innocents" in Paris, realized by Jean Goujon or still "The Flora", the famous fresco found around Pompeii.

At the end of this decade and during numerous years, Jean-Louis Berthod takes the step and starts sculptured woodworks of bigger size. These are bas-reliefs sculptured in themes, among these we shall note "The sleeper in the Valley" inspired by Arthur Rimbaud's poem, "Prévert's Song" influenced by Serge Gainsbourg's song or still "The Empty Chair" in tribute to the sculptor of Rumilly (Haute-Savoie), Robert Ramel.

In the second part of the nineties, Jean-Louis Berthod tries his gift in religious art by contributing to the restoration of the Church of Albens (Savoy/France), repairing sculptured friezes but especially by realizing two impressive furnitures: the altar of the Church on the theme of "Calming the storm" as well as the ambon on the theme of "the Christ Sower". We can also note the realization of a second altar sculpted for a chapel, a copy of a mosaic that we find in Jerusalem.

A that time, Jean-Louis Berthod goes to the higher level in the realization of his bas-reliefs, sculpting them in even bigger dimensions. Childhood memories, boards dedicated to the rural life such as it was formerly and its evolution nowadays, "The Renaissance", such are the main themes of these bas-reliefs. We shall also note a tribute to the victims of the World War I through his board "Meaulnes The Great", inspired by the novel of Alain-Fournier.
Meanwhile, Jean-Louis Berthod realized some sculptures on themes such as "The air", "The sound", "The water", "The movement", etc. …

Finally, Jean-Louis Berthod, over the years, also showed certain talent for the drawing by making numerous pastels inspired by memories ; we shall note his series of pastels dedicated to the rural life of former times.
And many other works of the artist to discover by browsing the website! Enjoy your visit!