The Altar of the Storm

He had promised it, he made it. After two and a half years of labour, doubts, enjoyments, uncertainties and spiritual boiling, Jean-Louis Berthod, of the hamlet of La Paroy, delivered for the church of Albens renovated a magnificent altar illustrated with an evangelic scene, “Calming the storm”. Invitation towards this exceptional and quite unique work of art.

Traditionally geographical center of the village, the church is also the spiritual center and, whatever are the convictions, constitute a major element of the heritage of a population.
So, this of Albens mobilized around its recent renovation the interest of a human much wider range than the simple parish, and the obtained results forced the admiration of the largest number.

High and beautiful in its found initial colors, the proud neogothic building has just grown rich of a tremendous element: a magnificent altar sculptured in noble wood under the care of Jean-Louis Berthod, talented amateur whose Albanians (name given to the inhabitants of Albens) were able to have an overview of the talent during the various exhibitions of arts and crafts in the room of animation of the municipality.

NEITHER GIFT NOR TALENT
Man frankly, in the natural simplicity and in the fascinated impetus, Jean-Louis does not recognize himself in these terms of gift and talent, that only hold the author of this article.
If he launched into this adventure of two and a half years of work, doubts and jubilation, he did not make it as artist for himself, but as a completely made lose interest contribution to the collective moose which built up itself around the restoration of the building.
For a long time, he wondered if he would be up to this challenge. Today, the result is impressive.

THE TORMENT OF THE WORLD
Placed in the entrance of the chorus, perfectly integrated into the row of central columns and emphasized by the rise of the highest vault, through colors of stained-glass windows, the altar presents on its face the extremely dense Parable of Jesus calming the storm (Marc IV, verses 35 and following ones).
In this episode, Jesus embarks with the apostles on the sea, the symbol for the Hebrew of the strengths of the evil. While Jesus falls asleep, a storm bursts out and the boat is threatened with wreck. Called out by the frantic apostles, Jesus communicate with elements, which calm down. But who is the one who can realize such a miracle? The astounded men wonder. Only God can calm the storm, concludes the evangelist.
This theme, Jean-Louis chose it and proposed to Father Jaeger because he is representative for him of our world tourmented in lack of serenity and certainties, rolled around by injustices, drowned of tears and blood, lost in the middle of unchained and uncontrollable elements.
His sculptural interpretation is remarkable.

THE STORM
Between two columns of clear walnut, which sit the altar in its frame, the boat cut in the wild cherry grapples with elements in fury. Waves persist in filling it; the wrathful winds tear the sail and manhandle the mast, while running in a dark sky of the threatening thick clouds.
At the foot of the mast, a first group of men fights; a little more on the left, the second frightened group loses confidence, and the third, on the extreme left, turns to the Christ calmed in search of hope. This symbolism is strengthened by two lightings: one illuminates vertically the naked of the pallid brightness of the thunderbolt, the other one coming from the extreme left which bathes the Christ and the face of the apostles.
To the right, in continuity of the movement of this scene, the bow of the boat spatters, serene, streams powerless to swallow it, representation of the tenacity of the hope and the capacity of the Church to cross the restless ocean of the centuries.
The black and foaming streams, contrasting with the smooth sweetness of the boat and the column, crash into the latter before falling again and being transformed into a peaceful water sculptured in a base of oak.

THE SPIRIT OF THE HERITAGE
Of inspiration said romantic, the set has a big suggestive strength. The Christ, discreet, is for the diapason of his situation at this moment of the Gospel, in phase of revelation.
We do not grow tired of contemplating the movement of this scene carefully studied by Jean-Louis, powerfully detailed and alive.
The rest of the altar, which was not a small matter too, for the artist, is more sober, although delicately decorated with a fresco of Romanic inspiration.
In the end, it is an exceptional and unique piece of furniture on which the priest celebrates from now on the Service, and which the Albanians can come respectfully to admire while waiting for its inauguration on May 21st.
The heritage, as says the author of this work, it is not only what we inherit and we know how to protect more or less; it is also, and above all, what what builds up itself permanently, the secretion of the genius of a society in the positive and spiritual sense of the term.
Free and humble contribution of the citizen Berthod to the heritage of its country is the one of the passion. 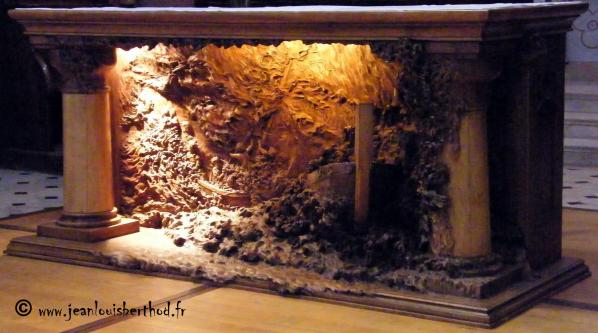 An extremely searched and alive work, enhanced by lights,
restores the interpretation of "The Calmed Storm"