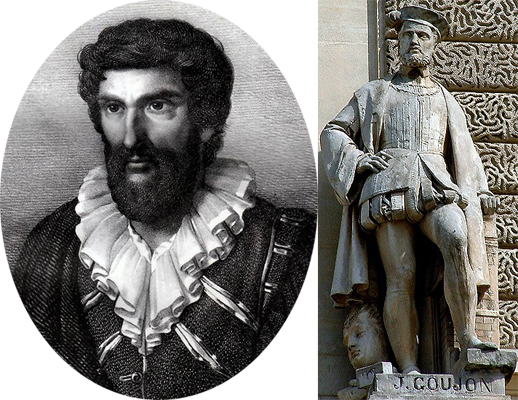 The classical artist Jean Goujon is one of the greatest Renaissance sculptors in 16th century France. Although much of his sculpture was lost in the French Revolution, his surviving works reveal a distinctive Mannerism style, full of grace and delicacy, and as sophisticated as the finest works of painting and decoration of the contemporary Fontainebleau School (1530-1610). The style is most evident in his decorations for the “Fontaine des Innocents”, Paris (1547-49) - the six relief panels of nymphs from the fountain, with their delicately carved rippling drapery - which are seen as his masterpiece. Goujon is also famous for his sculptural decoration of the Louvre palace (1549-1562), in collaboration with the architect Pierre Lescot. Sadly, nearly all Goujon's Louvre sculpture has been heavily and poorly restored, including the famous “caryatids” (1550-51) in the “Salle des Caryatides”. Although Goujon's reputation was slightly eclipsed at the end of the 16th century by a more overtly mannerist style, he remained a favourite of later French Classicists and Neoclassicists.

Early Life
Very little is known of Goujon's early life, or how he trained as a sculptor. He may have been be born in Normandy, around 1510. The first reference to him in documentation is 30 years later, when he worked on the Church of Saint-Maclou, Rouen, in 1540. Goujon is recorded in church accounts as the carver of columns supporting the organ loft. The pure classicism of the columns leads us to suppose that he must have stayed in Italy and absorbed the principles of Italian Renaissance sculpture, although for him to have taken up Mannerism as he did, shows that he was exceptionally quick on the uptake!
By 1544 Goujon had moved to Paris and was employed by Pierre Lescot, the famous architect of the Louvre. He began working on the restorations of Saint-Germain l'Auxerrois, which was a church when the Louvre was still a Palace.

In the Church of Saint-Germain l'Auxerrois

Fontaine des Innocents
In 1547 Goujon began work on decorations of the “Fontaine des Innocents”, Paris. The elongated figures enclosed in tall vertical panels convey a rhythmical linear pattern of great elegance in the arrangement of their filmy costumes. Much of these decorations are now on display at the Louvre, including tall reliefs nymphs, trition and puttis. The decorations, working under the guidance of Pierre Lescot, occupied Goujon until 1562. The essence of Goujon's art can be summarised in these works: all exemplifying his characteristic fluid movements, subtle modelling and rippling folds of drapery.

The “Salle des Caryatides” in the western wing of the Louvre contains his most ambitious sculpture. Originally designed to accommodate court entertainment, the floor is supported by four marble caryatids (sculpted female figures serving as an architectural support) in a classical Grecian style. Goujon's figures are draped in sheer cloth, clearly revealing the bodily forms beneath. This sort of rigorous classical sculpting, combined with sensuous modelling is archetypal Mannerism. 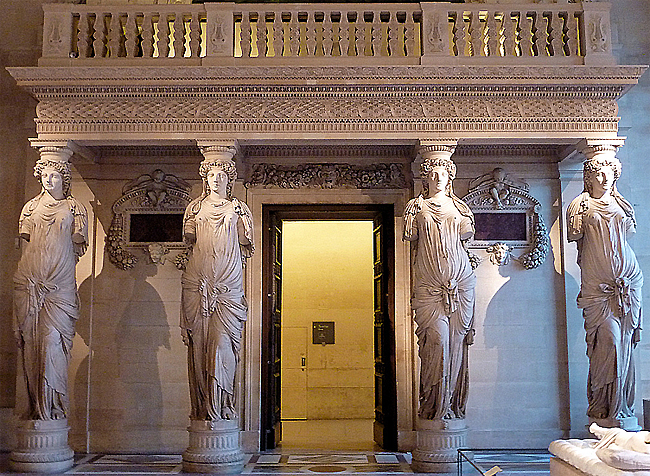 Other Sculptures by Goujon
The Seasons : Spring and Summer (1550-56, Hotel Carnavalet, Paris).
Goujon and his workshop decorated the court facade of the Hotel Carnavalet with four bas-reliefs, spanning between five windows of the main floor. They represent the Seasons: Spring (a young man), Summer (Ceres, goddess of the harvest), Autumn (Bacchus, god of wine and grape gathering) and Winter (an old woman). The complex folds in the drapery of his characters is characteristic of Goujon's style. 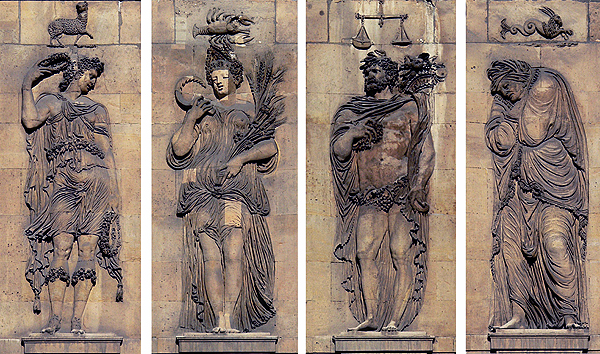 There is no record of any work executed after 1562. It is possible that Goujon was persecuted because of protestant Huguenot tendencies, and left France and died in Italy. He probably died in Bologna, where he is last documented in 1563 as a member of a group of Huguenot refugees. 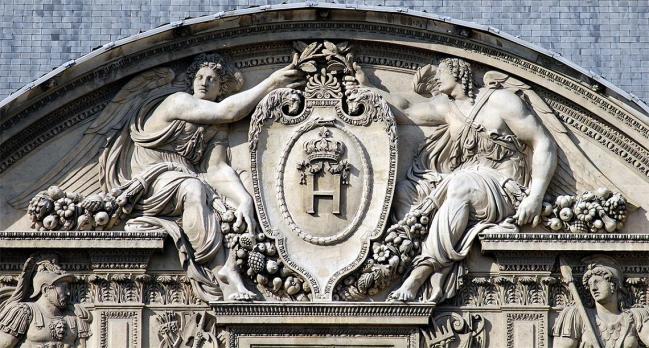 Lescot Wing of The Louvre